12U SENDS 21 BALLS OUT AT COOPERSTOWN IN DAY 2 ACTION 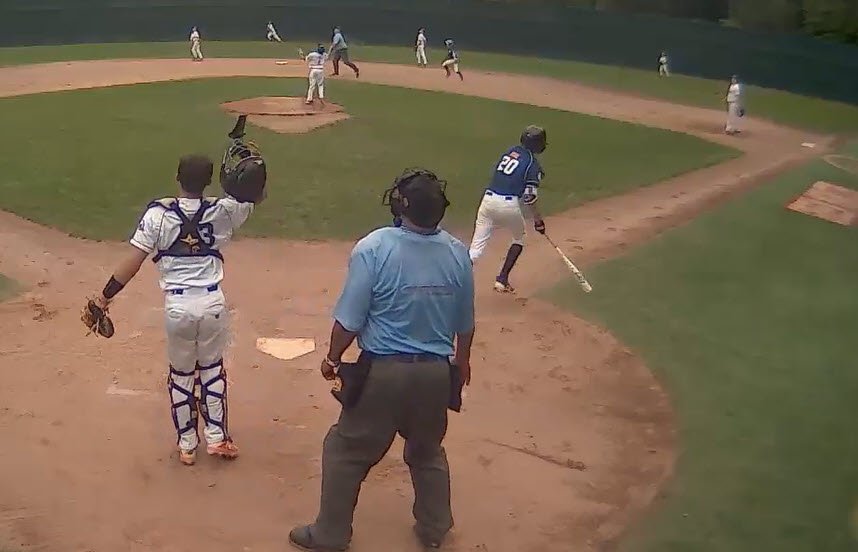 Gio Sambito belts his first of three homers against the Giants

Just when you thought they could not hit any better, Blue Wave 12U followed their Cooperstown All Star Village Championships opening-day barrage of 40 runs in the first two games Sunday JULY 29 with 42 runs over two games today (MON JULY 30) in eight total innings at bat.

Overall, the team belted 21 homers this morning in defeating the Summit Hilltoppers (NJ) 19-4 and Giants Futures (MA) 23-3, who they belted 14 round trippers against.

It started in the first inning against the Hilltoopers when Bryan Ho led off the game with a home run, followed by Austen Barnett and Jeremiah Robles.

Nolan Tillitt and Gio Sambito both went two innings on the mound for the Wave, both striking out two Hilltoppers.

There would be no let up in the evening game against the Giants, with eight Blue Wavers hitting it over the fence.

Gio Sambito stepped into the home run derby with 3 round trippers, also a perfect 4-for-4 at the plate with 4 RBI and 3 runs scored. Luke Wilson and Jeremiah Robles each hit two homeruns, with Treyson Arita, Derek Higareda, and Bryan Ho each parking one.

Bryan Ho went three innings on the mound, Luke Wilson closed the game against the Giants and did not give up a hit.

Blue Wave is now 4-0 in Cooperstown All Star Village Week 9 Championships with two pool games remaining for seeding that will be payed tomorrow (TUE JULY 31) at 12:20 PM EDT vs. Julington Vreek Titans (FL) on Field 35 and 7:35 PM on Field 29 Vs. Headfirst Bercovich (CA.

You can watch all the action streaming live HERE on the Cooperstown All Star Village website.

Gio Sambito Parks One of Three vs. Giants Futures