12U OPEN STRONG AT COOPERSTOWN

Jeremiah Robles on the mound for Blue Wave

Blue Wave came out swinging today (SUN JULY 29, 2019) in their quest to take home a Cooperstown All-Star Village 12U Championship in Cooperstown, NY.

To open the week-long event, the Wave swamped OZ Park Baseball (IL) 26-2 in four innings, followed by a 14-0 shutout vs. the Alameda Rascals (CA) in five innings to post a 2-0 record after one day of play.

Defensively, three Blue Wave pitchers only allowed one hit in the entire game with Jeremiah Robles starting and striking out 3 batters in two innings on the mound, not allowing a hit. Gio Sambito struck out 2 in one inning, with Andres Vaca closing and striking out one. 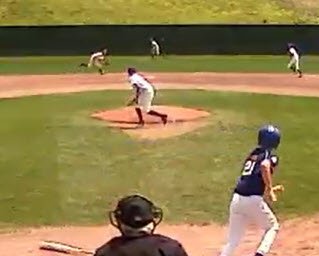 Great pitching and defense came to play in the second game as well as three Blue Wave pitchers combined for a 13-0 shutout of the Alameda Rascals, who only managed two hits in the game.

Barnett helped his effort on the mound with his second homerun on the day, going 2-for-2 at the plate with 2 runs and 2 RBI. Reiland was 2-for-3 with 2 runs and an RBI, Luke Wilson went 1-for-1 with a homer, 3 RBI, and scored twice.

The team will play two more pool games tomorrow MON JULY 30 starting at 7:30 AM EDT against the Summit Hilltoppers (NJ), followed by a 5:10 PM EDT game against the Giants Futures (MA).

You can follow their game schedule at Cooperstown All Star Village HERE as well as watch the games live streaming from the same site.