Play two full games in front of USD coaches, including Blue Wave alumni Matt Florer, who is entering his fourth season as Pitching Coach and Recruiting Coordinator for the Toreros. USD Coach Florer also played for Coach Sorensen during his Blue Wave years.

Since arriving in San Diego in 2019, Florer has helped guide the Toreros to the most wins (114) and highest winning percentage (.666) of any team in the West Coast Conference, and since he joined the conference’s coaching ranks in 2017 – no WCC assistant has won more games than Florer, who played collegiately at LMU. He played Mission Viejo High School as well as Blue Wave Baseball during his high school years.

“Matt was one of the best pitchers to ever play for us and has turned into one of the best young college coaches on the West Coast,” Blue Wave Founder Steve Kruse stated. “This is a great chance to be seen extensively by a great college program.” 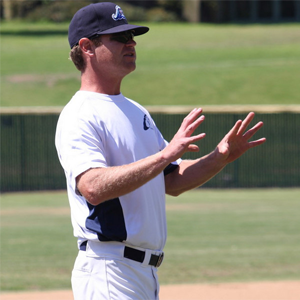 Sorensen serves as Blue Wave’s guest coach each summer and assists in promoting players to collegiate programs. He is both highly popular with the players and well respected by collegiate coaches as well.

Sorensen was a phenomenally successful starting pitcher in his days for the Oklahoma Sooners as well as Cal State Fullerton, where he pitched for two seasons under head coach George Horton and established a 17-0 record over two years.

His 12-0 sophomore mark was the second-best in school history, earning him first-team All-Big West Conference honors in 1999. He led the team in innings pitched (126.0) in his first year, beat all-Big West foes at least once as a sophomore, and captured the Titans’ only College World Series win in the 1999 series after going 8.1innings against Texas A&M.

Sorensen was drafted twice in his collegiate career, by the Toronto Blue Jays in 1998 and the Blue Jays once again in 2000.

Sorensen has coached many successful Blue Wave 18U Connie Mack teams over the years and many of his players and students have gone on to play college and professional baseball, including Dylan Moore (Mariners), Chad Wallach (Angels), and Justin Viele, hitting coach for the SF Giants.