LEARN TO HIT THE RIGHT WAY!

After all, Gerald Davis has been putting the bat on the ball for nearly 40 years and now he’s plying his trade at the Orange County Great Park, Irvine, as an independent hitting instructor for players that want to hit the right way.

“I’m not into analytics and launch angles,” Davis will caution when you first meet him. “I know that’s the new thing now, but for me, trying to hit home runs with each swing and   striking out at a more than enormous rate does nothing for your team in situations where contact and putting a good swing on the ball can move a runner, hit a sac fly, hit a line drive in the gap, hit a hard ground ball off the body of someone, and yes drive the ball out the park, can win your team a ballgame.”

Davis should know something about putting a good swing on the ball after playing professionally for 11 years.

He was drafted out of high school in Detroit, Michigan, in 1989 by the New York Yankees and later played with the Boston Red Sox (1992) before playing in various independent teams in the Atlantic League, Texas-Louisiana League, and three years throughout Mexico. 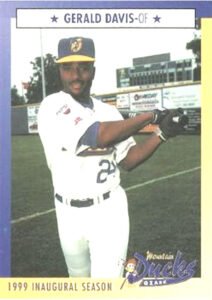 “I was fortunate in my career to be coached or get pointers from Jose Cruz Sr., Willie Upshaw, Paul Blair, Steve Braun, Jim Rice, Ted Williams, Carl Yastrzemski, George Scott, Ron LeFlore, Frank White, and Mike Felder,” Davis proudly recalls. “They all taught me to use the    entire field, be a total hitter with no or limited holes in my swing, to take the proper approach without a lot of movement.”

Even after retiring from professional ball, at 50 years old Davis still practices what he preaches by playing in NABA and MSBL adult leagues and multiple tournaments throughout the past 23 years.

“Most of the time I am playing against players that are 15 to 30 years younger” he points out. “I help a lot of them with their hitting and most of them encouraged me to start giving lessons to younger players.

To reflect his style of teaching hitting and what he learned from the pros over the years, Davis trademarked his Pure Hitters brand in 2017 and has now set up shop at the Great Park where he works with young players at their open-air cages.

He charges $90 for an hour lesson, which includes the cost of renting the cage there. He only does one-on-one lessons, no group sessions. 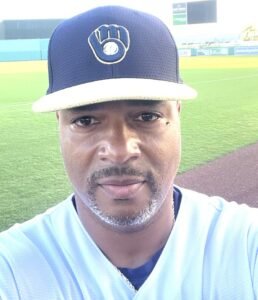 “I am very passionate about my training and only want those that are passionate as well,” Davis adds. “I want to teach young players to hit before they worry about power and home runs – home runs happen naturally when you become a complete hitting by developing your hand-eye and bat-to-ball skills.”